Centralised Recruitement to the Post of SCIENTISTS/ENGINEERS 'SC' in the diciplines of ELECTRONICS and MECHANICAL , ISRO HQ:ICRB:01:2012 dated 08-02-2012

Posted by Unknown at 5:15 AM No comments: 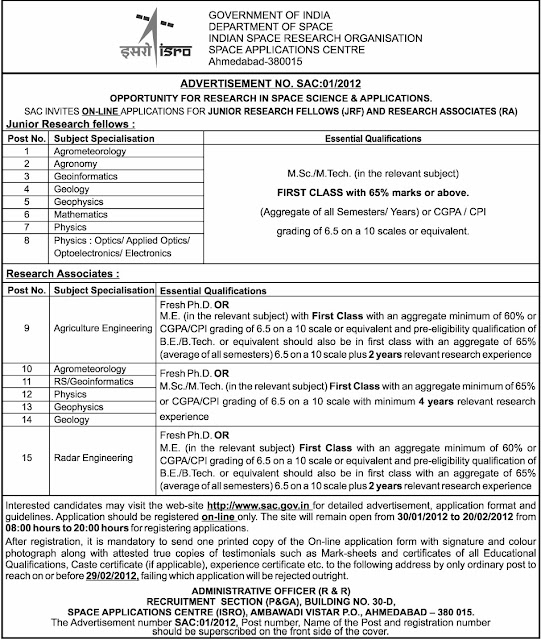 
After Wednesday night's much publicized mock-drill at Indian Institute of Management, Ahmedabad (IIMA), cops in the city carried out a similar but silent exercise at Indian Space Research Organisation (ISRO) in Satellite and Taj Gateway Hotel near airport in Hansol on Thursday evening.
According to sources, more than 400 cops from different security agencies took part in the massive exercise. At 7pm Thursday, National Security Agency (NSG) jawans, Chetak commandos, Anti-Terrorist Squad (ATS) marched along with hundreds of local police officers marched in at the locations.
Unlike their exercise at IIMA, cops decided not to impede normal traffic movement. On Wednesday, roads to IIMA were blocked during peak hours leading to chaotic traffic jams.
The mock drills are being conducted to assess various factors during crisis, said sources. The exercise checks response time, vigilance and irons out the grey areas which can pose a threat in the face of a real situation.
"We will be doing a review after the exercises are done. This way, we can find out how prepared are we to handle crisis such as a terror attack," said a senior cop.
source: http://www.dnaindia.com/india/report_400-cops-stage-mock-drills-at-isro-taj-gateway-in-ahmedabad_1607445
Posted by Unknown at 11:12 PM No comments:

Indian Space Research Organisation: 'Jugnu' launch marks watershed in Indian space tec...: New Delhi: The successful launch of Jugnu, a loaf-sized nano satellite designed by IIT-Kanpur, on October 12 marks a watershed in Indian...
Posted by Unknown at 11:26 AM No comments:

CRPF ropes in ISRO for GIS data of Naxal-hit areas

With the CRPF seeking the help of the Indian Space Research Organisation (ISRO) in the fight against Naxals, the security personnel in Maoist-affected areas have been provided laptops featuring the GIS (Geographic Information System) mapping data of the regions in the “red corridor”.
According to officials, the CRPF purchased 65 GIS mobile work-stations with “TerraExplorer Pro” software from the Department of Science and Technology and distributed these to units based in Left Wing Extremist (LWE) areas. The force also distributed 13 high-end work-stations with the software to its personnel in the areas.
“These work-stations contain the complete mapping of Chhattisgarh, Jharkhand and Orissa. We have further mapped seven districts in Madhya Pradesh and 14 districts in Bihar. In West Bengal, only East Midnapore has been mapped so far. The satellite imagery for the complete state of West Bengal and three worst-affected districts of Maharashtra — Gadchiroli, Bhandara and Gondia — is underway,” said the CRPF spokesperson.
Posted by Unknown at 10:59 AM No comments:

New Delhi: The successful launch of Jugnu, a loaf-sized nano satellite designed by IIT-Kanpur, on October 12 marks a watershed in Indian space technology for miniaturisation and an indigenously designed ejection system that ends dependence on imports.

Jugnu, placed into orbit by the Polar Satellite Launch Vehicle C18 (PSLV-C18) of the Indian Space Research Organisation (ISRO), miniaturises communication capabilities, power source and a control system, comprising the basic functions of a much bigger satellite, into a foot-long package just four inches in height and width, weighing only three kilograms.
IIT-Kanpur designed Jugnu's ejection system, a complex piece of technology that makes space missions possible by separating the satellite from the launch vehicle and placing it in a precise orbit. The mechanism went through dozens of rigorous tests before certification by the Vikram Sarabhai Space Centre as spaceworthy. IIT-Kanpur will be filing a patent through ISRO before dedicating it to the nation.
Ejection systems - or separation mechanism - available with ISRO are meant only for much larger satellites weighing between 100 kg and 1,000 kg, but not for a nanosat like Jugnu, said Nalinaksh Vyas, Jugnu's project leader and professor of mechanical engineering at IIT-Kanpur.
They are usually imported at a cost of Rs 50 lakh ($100,350) apiece, he added.
Vyas said that "there were several challenges in terms of both design development and administrative ones", which were successfully overcome by the enthusiastic band of 50 boys and girls from various engineering and science disciplines of IIT-Kanpur.
Jugnu cast such a spell on students that some of them even shunned tempting job offers at the peak of the IT boom, just to stay with the project, recalls Prof Vyas. Some even quit lucrative jobs to join the team. "Others like Shantanu Agarwal opted for M.Tech after completing B.Tech to be able to continue with the project," added Vyas.
Vyas mentioned Shashank Chintalagiri, a young physicist, as the mainstay of the project who inspired others with his innovativeness and bold approach, fixing problems as and when they arose, besides Preneet from the physics stream, Kshitij Deo (mechanical) and Anant Goyal.
Chintalagiri, elaborating on his experiences as a project member, said:
"A nanosatellite is smaller but has the same kind of functionality as a larger satellite does. We were initially torn between ISRO's 'right way' of doing things and a more practical approach that we could fit in our small size and weight.
"Eventually, we decided to go ahead and design our system, taking cues from other nanosatellites built around the world. When we gave our system a rough shape, only then did we compare it with what ISRO would do on its own satellites and made modifications accordingly.
"We would never have been able to achieve the size reduction we did by blindly following ISRO specifics, and ISRO themselves knew that as well. We were able to combine technology used in daily life . . . with the design principles of space technology," Chintalagiri concluded.
Initially, only three students had volunteered for the project begun in 2008 as part of the IIT-Kanpur Golden Jubliee celebrations, in a bid to foster space research capability among IITians and to develop technology for nanosats. The current lot included first year undergraduates to final year post-graduates and 14 faculty heads from as many disciplines to complete this challenging assignment.
Jugnu has started transmitting a beacon (blinking signal) round the clock all over the earth. Amateur frequency bands will be used for communication so that the 'beacon' can be tracked by amateur HAM (radio operators) around the world.
In fact HAM operators in Japan and the US have already received signals from Jugnu, according to sources in IIT-Kanpur. Messages sent to the satellite from a ground station are "uplinked," while those transmitted from the satellite to Earth are "downlinked." Jugnu operates on 3.5 watts of power and is expected to have a year-long life.
Jugnu will conduct remote sensing to map land use and cover, agriculture, soils, forestry, city planning, archaeological investigations, etc. Jugnu is powered by rechargeable batteries relying on solar panels, provided by ISRO, but the charging circuitry was fabricated by IIT-Kanpur, Vyas said. Normally it takes two hours to fully charge such a battery, lasting from a few hours to a few days, depending on the number of operations attempted for the payloads.
"The primary purpose of Jugnu is to demonstrate to the world as well as to ourselves that we are quite capable of doing this," concluded Chintalagiri.
http://ibnlive.in.com/news/jugnu-launch-marks-watershed-in-indian-space-technology/196362-11.html
Posted by Unknown at 10:58 AM 2 comments: